As FAIR (1/11/18) has noted before, US media—in an effort to find images of Iranian “dissidents”—routinely normalize the fringe group Mojahedin-e Khalq (MEK), despite the fact that it has virtually no support or legitimacy in Iran. This was seen again this past week when a number of major outlets reported on a speech Trump advisor Rudy Giuliani gave at an MEK conference; the outlets failed to note that the group is widely loathed inside Iran, and seen as an illegitimate cult by experts across ideological lines.

The MEK has next to no support in Iran itself, where it’s hated for working with Israeli intelligence and fighting alongside Saddam Hussein in Iraq’s war against Iran in the 1980s that killed roughly 500,000 Iranians. The group—which was formerly disowned by the last major protest movement inside Iran, the Green Movement—has carried out several terrorist bombings in Iran, and was officially listed by the US State Department as a foreign terrorist organization for 16 years, until it was removed by then–Secretary of State Hillary Clinton in 2012, after a lobbying effort by pro–regime change groups inside the United States. 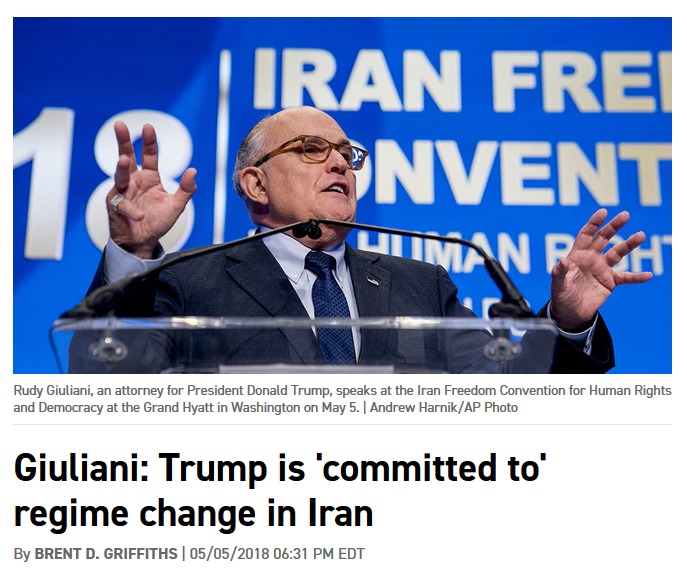 Politico (5/5/18) referred to Giuliani’s audience as “a group that aims to promote democracy” rather than as a front for a cult responsible for a string of bombings.

Members of the MEK cult cannot have sex. Nor, according to former member Masoud Banisadr, can they have “sexual thoughts.” “The idea was that we were in a war to take back Iran, so you cannot have a family until the war is won,” the ex–PR person for the MEK told Vice (9/2/14) in 2014:

This was the excuse the outside world would hear, but inside we were told your spouses are a barrier between you and the leadership. We were ordered to surrender our soul, heart and mind to [MEK leader Massoud] Rajavi and his wife.

Several outlets, apparently unfamiliar with the MEK or its assortment of front groups, like the “Organization of Iranian-American Communities,” casually referred to it as some type of generic dissident group: 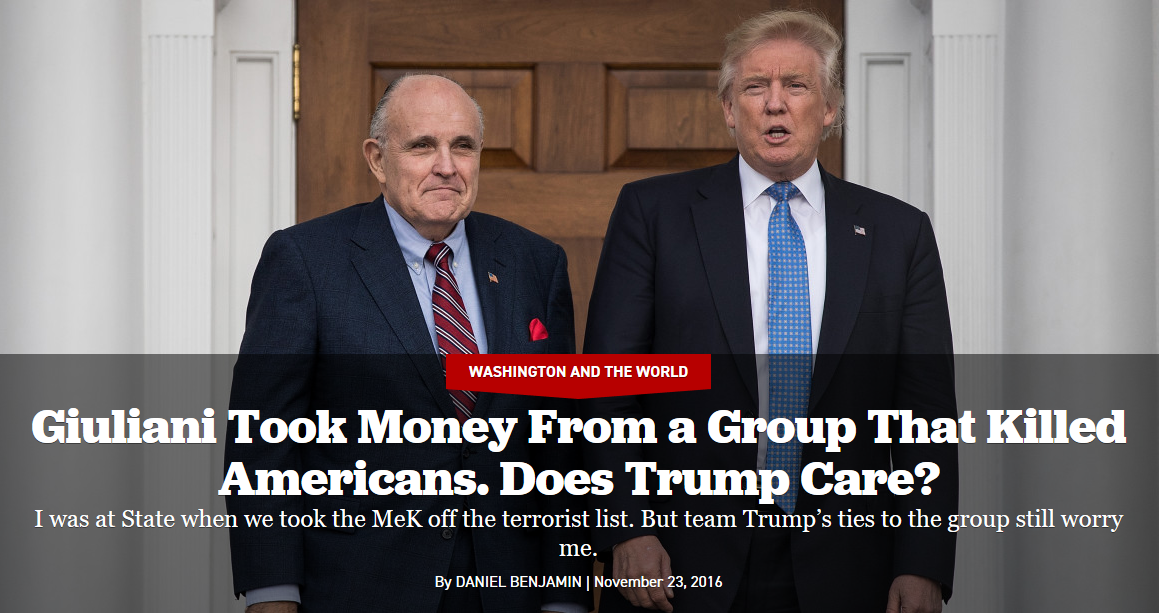 None of the above outlets bothered to mention the MEK’s cult-like nature when reporting on the so-called “Freedom Convention,” or the fact that Giuliani has been paid thousands of dollars by the group. According to Politico (in another article, from 2016):

The MEK has paid Giuliani handsomely for years—$20,000 or more, and possibly a lot more—for brief appearances before the group and for lobbying to have it removed from the State Department’s list of Foreign Terrorist Organizations (FTO), which occurred in 2012.

Shouldn’t this be mentioned? Isn’t this relevant to what purpose the “conference” serves, and why its voice is legitimized and boosted by Western media and Trump flacks?

Part of what makes the MEK’s strategy so effective is their rebranding themselves as  benign-sounding, Western-friendly democrats just fighting for “freedom.” That media play along with this fiction is evidence of 1) widespread ignorance of the most basic facts of Iranian politics, even among nominal foreign reporters, and 2) how desperate Western media are for images of pro-US, pro-Israel regime-change advocates—a cohort that is close to nonexistent in non-cult form.

Though it wasn’t in reference to Giuliani’s speech, HBO’s John Oliver (Last Week Tonight, 4/22/18) committed a similar oversight two weeks ago, describing footage of an MEK crowd as “a group of Iranian dissidents.” That’s true, in a very narrow, technical sense—in the same way the Westboro Baptist Church could be referred to as “US dissidents,” which would be equally misleading in terms of the impression conveyed.

One notable exception was the Washington Post’s Ishaan Tharoor (5/7/18), who pointed out the MEK’s cult status, as well as their payoffs to Giuliani, in his breakdown of the event.

The fact that almost no one else brought up the cult-like nature of Giuliani’s associates indicates that most in US media are entirely uninterested in conveying fundamental facts about what’s going on in Iran. A troubling gap in its own right, but doubly so when the present administration is mounting a well-documented and deliberate effort to undermine and overthrow that country’s government.